Gout And Celiac Disease: What Is The Connection? 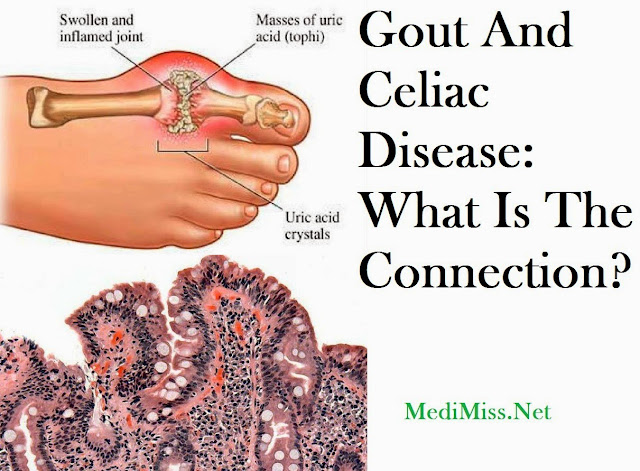 Gout and Celiac Disease; Is There A Connection?
There has always been a considerably amount of speculation about whether or not Celiac and Gout share a common thread. There are several well-known symptoms and/or shared health problems of both of them. Among them are indications of Autoimmune Disorders, Rheumatoid Arthritis, and Bone and Joint Pain, which lead to a reasonable assumption that Gout does fit into the realm of Celiac Disease.
What is Celiac Disease?
Celiac Disease damages the small intestine and interrupts the absorption of nutrients from food. People who have Celiac have an intolerance to gluten; a protein found in wheat, rye, and barley. Gluten is usually found in foods but many other common products like medicines, vitamins, and lip balms can also contain gluten.
In extreme cases, the presence of gluten on a molecular level is enough to cause severe reactions for those with advanced sensitivities.
When someone with Celiac Disease eats certain foods or uses different products containing gluten, their immune system will damage or destroy the "villi" - the microscopic, finger-like lining of the small intestine. The villi function to allow nutrients from food to be absorbed through the walls of the small intestine into the bloodstream. Without the villi functioning properly, signs of malnutrition may start to appear.
Celiac is not only an abnormal immune reaction to gluten, but also a condition where nutrients are not absorbed adequately and studies have shown proof that it is genetic in nature.
There have been reports of Gout Sufferers who also have Celiac Disease that have found relief from both of the diseases with prolonged and intensive use of highly concentrated Antioxidants.
The symptoms of Celiac can also vary with such factors as; a person's age and/or the degree of damage that has been done to the small intestine. Some people have the symptoms and condition for 10 years or more before they are diagnosed. If left undiagnosed and untreated, the greater the risk of sustaining long-term complications.
How does Gout fit in?
Rheumatoid arthritis is typically labeled as an autoimmune disease. No condition is completely and exclusively manifested from internal sources and it is logical that there is always some form of external influences. Fairly often, Arthritis is associated with inflammatory bowel disease. Food allergies, poor gastrointestinal tract function, and immune attacks on connective tissues, are closely associated. In the case of all arthritic instances, close attention should be paid to dietary intake and monitored carefully.
Arthritis that appears to stem from an allergic reaction is not usually recognized as a food allergy, even when pain and swelling starts to develop in one of more of the joints. It doesn't matter if the food is something that is commonly eaten by an individual, or something completely new; joint inflammation can occur due to an accumulation of causes or from a combination metabolic substances. Such is the case with Gout.
Presently, Celiac Disease and "Gluten Intolerance" are often used interchangeably although this is a misconception. To diagnose Celiac, blood tests are drawn to measure for high levels of anti-tissue transglutaminase antibodies or anti-endomysium antibodies.
However this is not to discount that more reports are now showing low-level irritation and gluten sensitivities in the small intestine in more people. Due to the number of gout sufferers that are also showing signs of Celiac Disease, as well as the growing number of people expressing inflammatory bowel-like symptoms, there is evidence that low-grade gluten intolerance is affecting a much broader range of the population than previously thought.
The speculation still remains that either Celiac Disease or Gluten Intolerance is the culprit or at least an accomplice to the condition of Gout.By Bert Middleton